The U.S. Army has selected FirstNet to support firefighters, law enforcement, and security personnel at 72 Army installations across the U.S. and Puerto Rico. FirstNet can help the Army ensure reliable, highly secure communications capabilities during national emergencies such as supporting the nation’s response to the Coronavirus and improved communications interoperability between base first responders and local, state, and federal first responder agencies.

Under the Task Order, AT&T is delivering nearly 3,200 lines of FirstNet services, more than 3,000 FirstNet-capable devices, and 700+ signal boosters to help improve indoor connectivity. We are also providing staging and kitting of devices, including preloading multiple FirstNet apps on the devices. In addition, with FirstNet, the U.S. Army has access to a dedicated nationwide fleet of 76+ land-based and airborne portable cell sites stationed across the country to provide connectivity during significant events in support of public safety’s mission. These critical response assets are available 24/7 to the U.S. Army’s Incident Commanders at no additional charge. 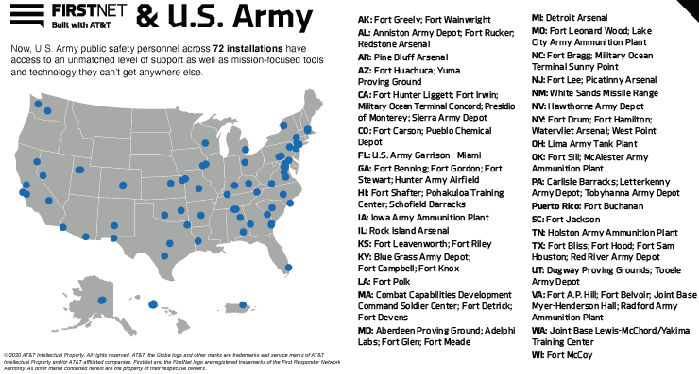 The Army explored the benefits of FirstNet during a pilot program in Spring 2020 at Military Ocean Terminal Sunny Point, NC. The Ocean Terminal is part of the Army’s Materiel Command’s Surface Deployment and Distribution Command (SDDC). The Army also evaluated FirstNet’s capabilities with its fire and military police responders under storm conditions to better understand how they could benefit from FirstNet. The pilot allowed the Army to see the benefits of in-building signal boosters as well as FirstNet’s ease of use, resilience, and the breadth of capabilities that could be available to each Army installation regardless of size or location.

More recently, when Hurricane Laura hit the Army’s Fort Polk in Louisiana on August 27 with maximum sustained winds of 150 miles-per-hour, it carved a path through and around the installation, taking down trees and power lines and cutting communications. The Army tested FirstNet Ready™ wireless routers installed in camera-equipped vehicles that provided Army operations and planners with near real-time delivery of video despite the extreme weather conditions. They agreed the solution proved to be an effective means to support incident management and restore base operations following a natural disaster.