A slow WiFi connection is so frustrating, especially in these times when the majority of people are working from home. On top of that, even if you are chilling at home while binge-watching your favourite web series, experiencing buffering again and again ruins the mood completely. However, you can simply call your ISP and ask them to fix it for you. But, in some cases, even after getting it fixed from the ISP’s end, the problem still persists. Maybe, the problem isn’t with your ISP but with something else at your end.

There may be plenty of reasons for which a WiFi connection might appear slow. It could be a faulty modem or router, too many connected devices at the same time, or some DNS server issue. Whatever the issue is, we will be discussing many fixes in this article that will help you utilize your Internet connection’s complete bandwidth. Hence, if you wish to fix the issues with your slow WiFi connection, make sure to read this article until the end.

Generally, all the latest WiFi routers support two different frequency bands, 2.4GHz, and 5GHz. Both these network bands carry different bandwidths and have their own coverage area as well. Speaking of the 2.4 GHz band, the internet signals on this band can travel up to a farther distance than the 5GHz band. Hence, the coverage area of the 2.4GHz band is way more.

In contrast, the internet signals on the 5GHz band cannot travel quite far. Hence, the coverage area of this band is less. However, since the 5GHz band can carry more information than the 2.4GHz band, you will experience much higher WiFi speeds when you are connected to a 5GHz band.

In all, if you seek higher wireless speeds, you should be connected to the 5GHz band. It’s basically ideal for smart TVs since they are frequently used for streaming content online, so a better internet speed is required. On the other hand, devices like smartphones, laptops are quite portable, so the 2.4GHz band is perfect for such devices since the internet speed will remain adequate in a wider coverage area.

Actually, when more and more devices start getting connected to a band, they are assigned a channel automatically. However, if the number of connected devices gets more than the number of channels available, channel congestion starts to happen. To get the max possible speeds from our WiFi connection, our goal is to find the least congested channel on the band and stay connected to that only.

Let’s suppose you are connected to the 2.4GHz band on your WiFi connection. That basically means you are connected to one of the 11 channels, right! Out of these 11 channels, channel 1, 6, and 11 never overlap each other. So, these are the 3 best spots for you to be. By default, most WiFi routers connect you to channel number 6. Thus, connecting to channel 1 or 11 is the best possible option available for you to experience the best WiFi speeds possible on that network band.

Have Too Many Bandwidth-Heavy Activities 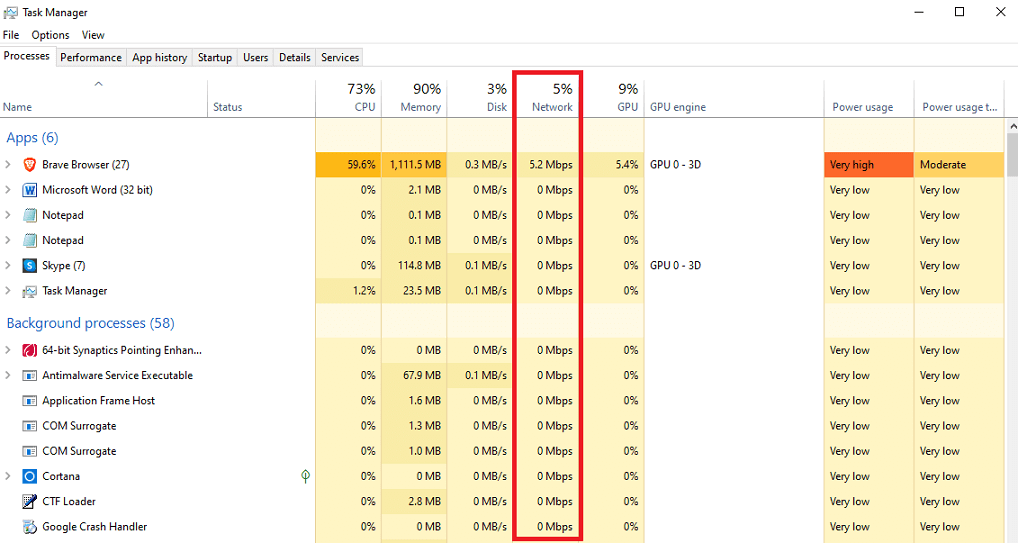 To check for all such ongoing activities, you can simply open the Task Manager by using the hotkey Ctrl+Shift+Esc and observe the Network usage. In the Network column of the Taskbar, you will also notice how much bandwidth is being used by all the ongoing activities. If any of those activities are not quite important and can be halted for some time, go for it. Or if you find any app unnecessarily sucking up the bandwidth that’s not even useful for you, simply right-click on it and click the End Task button to end it.

The router is Out of Date

It’s not that you buy a router and keep using it for a lifetime; these devices do age as well. New and improved technologies keep coming from time to time, and you should definitely consider upgrading the gadgets you use accordingly as well. Maybe the router you are using is not in good condition anymore to perform like it used to. Another big mistake that most people make is that they end up subscribing to a high-speed internet connection which an old router can’t generally handle.

As of now, the latest WiFi technology around the market is WiFi 6E that allows you to experience wireless speeds up to 9.6Gbps. However, such routers are quite expensive, so you can also consider the WiFi 5 routers as well. They are generally labelled as 802.11ac WiFi technology and deliver nearly up to 1Gbps speed which is good enough for normal usage. You will be able to comfortably stream 4K content on multiple devices with this much bandwidth without disturbing the network bandwidth for other people connected to the network.

Router Is in the Wrong Place

While installing a WiFi router in your home, choosing the right location to place the router is quite important. Signals from the router generally scatter towards every direction where the intensity or strength of the signals deplete as you go far from the router. Hence, one possible reason for which you might be experiencing low internet speeds is poor signal strength. If that’s the case, you are either too far from your router. Or the router is placed in some odd corner in your house that the signals are not properly reaching your device.

You can simply eliminate the WiFi dead zones by placing the router somewhere in the middle of your house. While you place your router in your home, make sure it’s not too close to any metal objects such as a refrigerator, as WiFi signals can properly pass through metals and also water. So, placing a router near any fish tank can also weaken the signal strength. 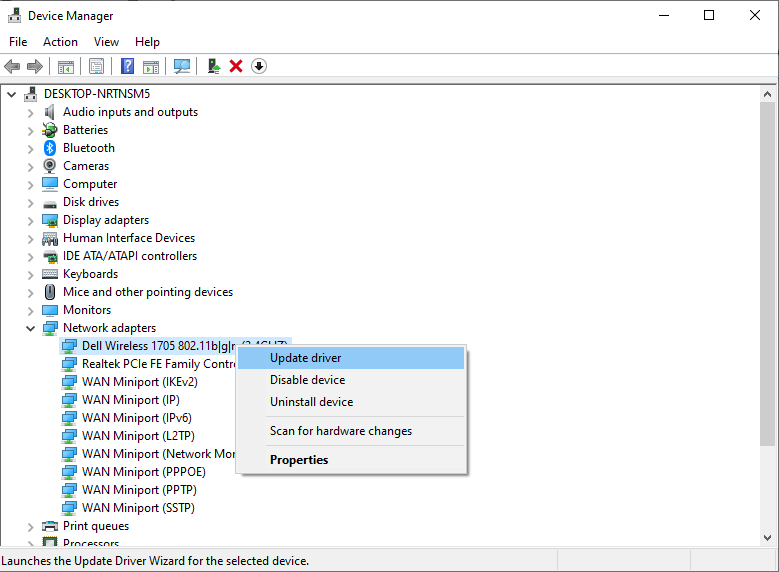 If you are facing internet speed issues on a particular computer and not on other devices, it can be a driver issue. Generally, laptops with Windows operating systems get updated from time to time. But, there can be situations where the network drivers on your computer might not get updated or go missing due to some big or other reason. In that case, you can fix the driver issue on your computer manually by reinstalling the drivers or updating them.

If your computer runs on Windows 10 OS, you can easily update the drivers for the network adapter on your PC. To do so, press the hotkey (Windows Key + X), and click on Device Manager.

You will find all the driver’s related information in the Device Manager window. Here, click on Network Adapter and select the one which you are using right now. Once you select it, right-click on it and click on the Update Driver option. This will automatically update the drivers on your Windows PC. Afterwards, all you need to do is restart your computer once to confirm the changes.

How to Test Your WiFi Speed

Once you have tried out all the fixes, it’s time to test out your WiFi’s performance and see if it has improved or not. To test the WiFi speed, we personally prefer using Speedtest.net or fast.com since these are the most popular and convenient websites to use for speed testing. Before you test your internet speed, make sure to disable all the background activities that might interfere with the connection.

After the speed test, if the results are not satisfying or not matching your current internet plan, you can contact your ISP and discuss it.

That’s it! We have mentioned some of the best fixes that can significantly improve your WiFi speeds. If you still experience the same internet speeds as before, consider discussing it with your ISP or upgrading to a better internet plan. Remember that you should always try to be connected to the right network band and channel to experience the best possible WiFi experience. Apart from that, do make sure all the devices you use have updated drivers. Another thing you can try to improve the WiFi connection at your home is by upgrading the WiFi router. In case you have any more queries, feel free to ask us in the comments section below.