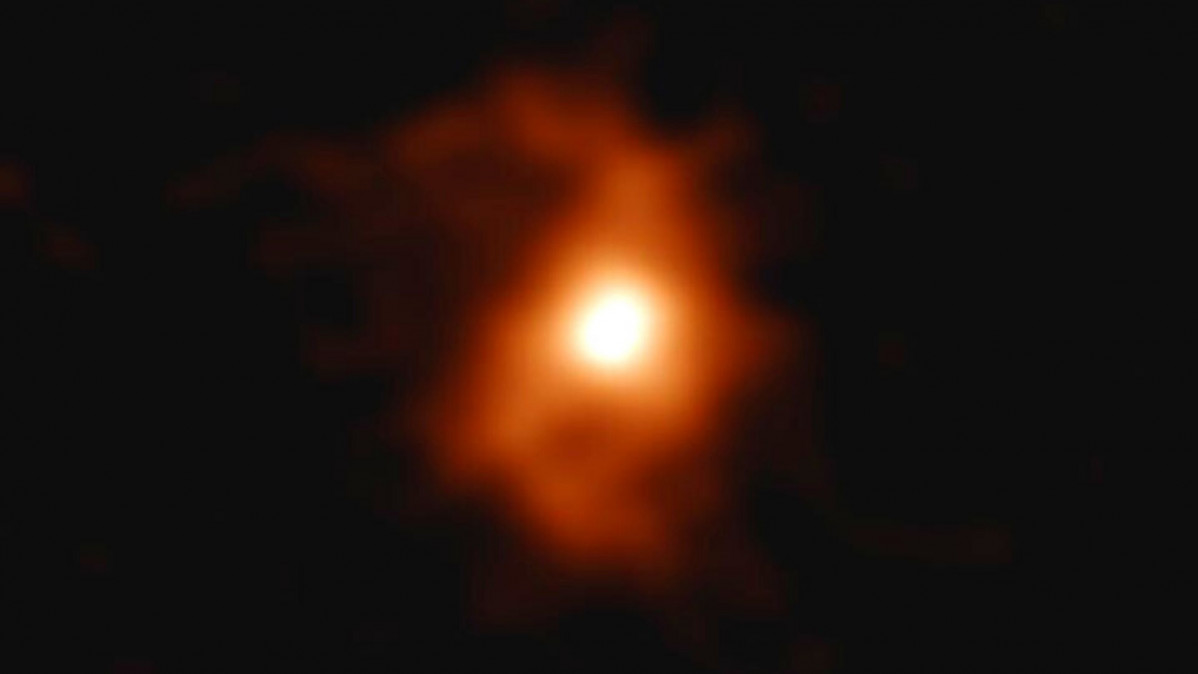 Much remains unknown to scientists about the era immediately following the big bang, when the universe was hot, dense, and devoid of spiral galaxies like our modern Milky Way. Consequently, it’s difficult to pin down when the first complex galaxies were born. But we’re beginning to close this cosmic gap of empirical darkness.

New data from the Atacama Large Millimeter/submillimeter Array (ALMA) just revealed the faint shape of a galaxy with a spiral structure existing only 1.4 billion years after the big bang, according to a new study published in the journal Science.

Look on ALMA’s work, and rejoice: This is the most ancient galaxy of its kind ever seen.

This discovery of a galaxy with a spiral morphology at such an early universal stage is significant because it gives us a clue to an old question in cosmology: When and by what means did the first spiral galaxies form? “I was excited because I had never seen such clear evidence of a rotating disk, spiral structure, and centralized mass structure in a distant galaxy in any previous literature,” said Takafumi Tsukui, a SOKENDAI graduate student who is also lead author of the paper, in an embargoed release shared with IE. “The quality of the ALMA data was so good that I was able to see so much detail that I thought it was a nearby galaxy.”

Our galaxy, the Milky Way, is a spiral galaxy. In the modern universe, they are both populous and fundamental, constituting up to 70% of the total galaxies in the cosmos. But previous studies have suggested that the proportion of spiral galaxies reduces rapidly the farther we peer back into the ancient history of the universe. This leads to the mystery of when and how spiral galaxies first came to be. In the study, Tsukui and Satoru Iguchi, a professor at the National Astronomical Observatory of Japan and SOKENDAI, came upon a galaxy designated BRI 1335-0417, which was stored in the ALMA Science Archive. It had existed 12.4 billion years ago, and contained vast amounts of dust, which hides the starlight. This hindered astronomers’ ability to study it via visible light.

Enter ALMA, which detects radio emissions from carbon ions in the galaxy, allowing scientists to analyze the inner workings of distant galaxies that remain obscured in conventional light. The researchers discovered a spiral structure that spans 15,000 light-years in radius (from the galaxy’s center), making it one-third the size of our Milky Way, but roughly equal in mass, consisting of stars and interstellar material. “As BRI 1335-0417 is a very distant object, we might not be able to see the true edge of the galaxy in this observation,” said Tsukui, in the release. “For a galaxy that existed in the early universe, BRI 1335-0417 was a giant.”

Peering into the depths of the ancient universe

However, this is where deeper questions arise. How could such a distinctly complex spiral structure form when the universe was only 1.4 billion years beyond the big bang? The researchers investigated several possible causes, suggesting that it might have happened after an interaction with another, small galaxy. At the time of observation (12.4 billion years ago), BRI 1335-0417 was actively forming stars, with gas in the outer part of the galaxy existing in a gravitationally unstable state — ideal for star formation. Such a cosmic circumstance typically happens when large quantities of gas are pulled into the galaxy from beyond its borders, perhaps during collisions with other, smaller ones.

However, since this happened long, long ago, we don’t know what became of BRI 1335-0417. Galaxies with vast quantities of dust that are actively generating stars in the ancient universe are suspected to be the proto-form of gigantic elliptical galaxies in our modern-day universe. If this is what happened to BRI 1335-0417, then sometime between then and now, it must have morphed from a disk into an elliptical structure. But we can’t tell its future from Earth unless we traveled 12.4 billion years into our own future, to see the light the galaxy is currently emitting, from whatever position it now holds. Assuming, of course, Earth, the Milky Way, and BRI 1335-0417 still exist that far into the deep future.

“Our solar system is located in one of the spiral arms of the Milky Way,” said Iguchi, in the release. “Tracing the roots of spiral structure[s] will provide us with clues to the environment in which the solar system was born. I hope that this research will further advance our understanding of the formation history of galaxies.” There’s much to understand about the early universe, with theories about the very early universe immediately after the big bang on one hand, and empirical observation with telescopes billions of years later attempting to probe deeper into the past. In essence, this ancient galaxy is not only the oldest one ever seen, but also an embodiment of our scientific reach into the very beginnings of the modern universe.