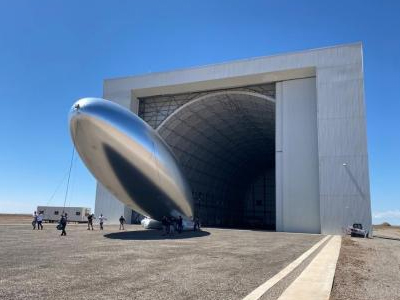 Sceye, a developer of high altitude platform stations (HAPS), announced that it successfully launched its stratospheric platforms and flew at an altitude of 64,600 ft. The announcement comes on the heels of Sceye’s long-range record for maintaining data connection in OpenRAN at a distance of 140 km. With financial support from the State of New Mexico, the company also joins a consortium of New Mexico-based telecommunications companies and tribal entities to pilot delivery of universal broadband access to the Navajo Nation.

We view the successful flight and the record setting data connection as a significant milestone for our technology; one that could dissolve the rural broadband barrier,” said Sceye CEO Mikkel Vestergaard Frandsen.

Sceye’s unmanned stratospheric platform launched from Roswell at 11:20 a.m. MDT on Wednesday, May 19. It landed safely that afternoon at 1:30 p.m. MDT. The company recently conducted tests to determine the data connection range of its systems. Standard LTE technology allows for a range of 100 km; Sceye’s systems have added an additional 40km, setting a long-range record in LTE OpenRAN architecture. Sceye’s combination of technologies can cover areas as wide as 27,000 square miles with high-speed broadband for all users of fixed and mobile, carving a path forward to providing true equitable access.

Sceye, Sacred Wind Communications, CellularOne, PVT Networks, Santa Fe Indian School and Navajo Technical University are banding together with the goal of achieving 100 percent connectivity across the Navajo Nation. According to the Navajo Tribal Utility Authority, 60 percent of the Navajo Nation’s over 300,000 residents do not have fixed Internet access.

“The consortium is a major leap forward in closing the digital divide for the Navajo Nation,” said John Badal, CEO of Sacred Wind. “Sceye’s tower-in-the-sky approach could avoid building hundreds of new cell towers across the State and the accompanying need to use tribal lands.”

In partnership with the consortium, Sceye will pilot one of its HAPS over an area of approximately 6,000 square miles to demonstrate 100 Mbps download speeds to homes, schools and clinics, which is the FCC’s gold standard for rural area broadband.

“The State is excited to support this innovative effort by Sceye and its partners to bring more affordable broadband and telecommunications to tribal and rural communities throughout the state,” said Economic Development Cabinet Secretary and Spaceport Authority Board Chair Alicia J. Keyes.

Sceye aims to provide universal broadband to help lift billions of unconnected and under-connected people out of poverty, conduct high-resolution, real-time Earth monitoring to combat climate change, and early detection and interception of natural disasters before they spiral out of control.