Solar energy has been getting more and more affordable every year. In theory, solar energy is basically available for free as the solar panels are powered by the energy received from the sun, which amounts to about 173000 Terawatts of energy distributed over the surface of the earth. But, the equipment that was needed to convert the solar energy into usable power used to be quite expensive back in the day.

Right now, there are a number of brands that have entered the market competition for supplying solar-powered gadgets and solar panels. Thus, the price of these devices has reduced a lot, and it is now a considerable option to get a couple of solar panels installed in your home to utilize free electricity at your home.

A lot of solar energy enthusiasts are ready to invest in solar panels even as we speak. But, it is necessary to understand how these solar panels work and how many would you need to install to get a particular task done. Hence, we are going to go through the very basics of solar panels so that you can understand these panels in detail before you decide to buy one. We will be going through the construction, working, and advantages of solar panels, which should give you a good idea about solar panels all together.

We will strongly recommend you to read our take until the end before you start working on your own solar panel system.

What Is Solar Energy?

Before we move on to solar-powered panels, let’s try to understand solar energy in brief. To put it simply, solar energy is the energy received from the sun which has existed even before the earth was a habitable planet. Ever since, the sun has been showering the earth with hundreds of thousands of terawatts of energy daily. Such high energy capacity is equivalent to nearly 10000 times of the energy utilized on the globe on a daily basis.

This should give you a good idea about the potential of solar energy and how it is going to be the power source of the future. But still, the majority of industries and households are dependent upon conventional energy sources as converting solar energy to electrical energy requires solar panels, which used to be quite expensive when they were first introduced.

But now, a lot of countries are turning to solar energy and promoting the production and distribution of solar panels. Thus, the overall cost of utilizing solar energy has decreased a lot in recent years so that anyone can get a solar panel system set up at their homes for free energy.

According to the International Energy Agency, solar energy is the world’s fastest growing source of energy, and rightfully so as it is the cleanest source of energy that does not damage the environment as there are no byproducts of solar energy. Thus, you should invest in a solar panel system right now. But before you decide to buy a solar panel, let’s try to understand how solar panels work.

How Do Solar Panels Work?

Solar panels are the most crucial part of any solar-powered system as these devices capture the solar energy and guide it towards the solar inverter to convert it into electrical energy. A solar panel consists of a large number of solar cells that are connected together to form a panel. When a solar cell comes in contact with sunlight, the photons of the sunlight displaces the electrons present in the atom of a solar cell. Thus, the free electrons flow through the circuit, which generates electricity.

What are Solar Panels Made of? 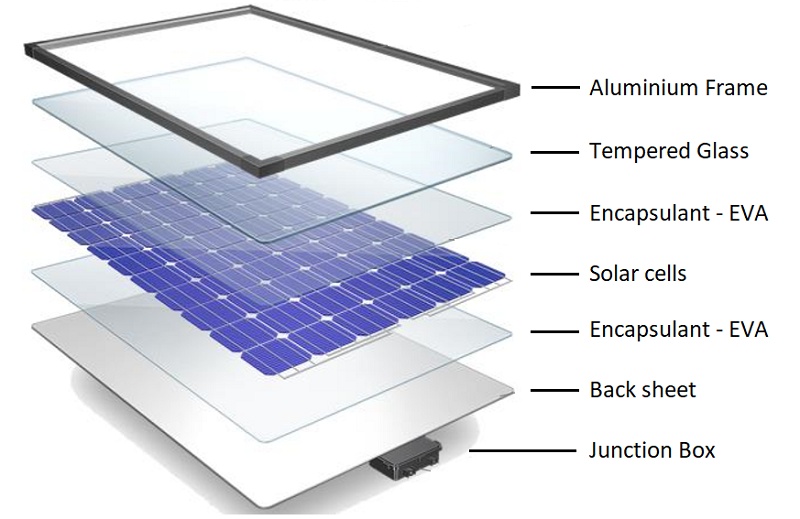 Solar panels are made of special solar cells which are manufactured by photovoltaic elements. Generally, solar cells are made up of silicon or a similar type of element which makes it a semiconductor. Each solar cell is designed with a positive layer and a negative layer which is capable of creating an electric field when joined together. The construction of a solar cell is quite similar to that of a regular battery.

Different types of solar panels are manufactured from different elements. For example, the solar panels that are designed to handle the sunlight on earth will differ from those which are made for applications in space.

A solar cell can be designed with a single layer of light-absorbing material, or multiple layers connected together to form a multi-junction solar cell for better performance. Based on the application, different types of silicon are used for manufacturing solar cells, such as Monocrystalline silicon, Polycrystalline silicon, Ribbon silicon, and many more.

How Do Solar Panels Generate Electricity? 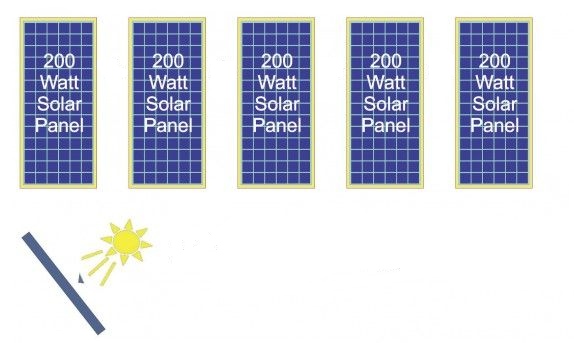 Now that you know what solar panels are and what they are made of, let’s try to understand the working principle of solar panels and how they convert solar energy into electrical energy. A standard photovoltaic solar panel generates a direct current that recharges a battery which is further used for consumption. In a direct current electrical circuit, the electron flows in a single direction. The electron travels from the negative side of the circuit to the positive side of the battery.

On the other hand, in an AC current circuit, the electronics travel in a bidirectional manner. As the electrons are traveling in forward and reverse direction simultaneously, a positive and negative current is generated, respectively. The AC current is utilized in almost every household as well as industry to power electronic items. But, a solar panel only operates with DC current. So, to convert DC current into AC, we need to introduce a solar inverter into the circuit as well.

What Does a Solar Inverter Do?

The sole purpose of a solar inverter is to convert the DC current generated from solar panels into AC current. On top of converting the DC current to AC, the inverter also provides the statistics of the system and provides ground protection to the system. You will find all the important information such as voltage level, current, power capacity, etc.

Before, a central inverter used to be installed for a whole array of solar panels. This had a lot of limitations as problems with a single solar panel would halt the whole system until it is fixed. This would reduce the efficiency of the entire system, which was not cost-efficient in terms of performance.

To avoid that, you can get micro inverters for solar-powered systems. These inverters are compact in size and are optimized to be used with an individual solar panel. This allows maximum power generation in your solar panel system as each panel is utilized up to its maximum capacity.

A solar inverter intakes the DC current generated in solar panels and transforms it into an alternating current. This is possible because of the transforms installed in a solar inverter. There are usually two or more transistors installed in an inverter which rapidly turns on and off at a fast speed which generates the alternating current at the output.

How Does a Solar Panel System Work?

Now that you are familiar with all of the components used in a solar panel system, let’s try to understand how a solar panel system can power your home entirely. The DC current generated by the solar panel is fed to the solar inverter, which converts it into AC current. You can either connect a large battery to this system so that it can store the electricity which you can use later on or directly power certain appliances that you can operate only in the day time.

Getting a solar system installed in your home is now easier than ever. All you will have to do is find a grid-based solar system available in your area and sign up for their services and get the solar panels installed on your home right away. You can utilize the free electrical energy generated from solar panels and also get additional credits by transferring unused energy back into the grid. If you still have doubts about how solar panels work, you can reach us via the comment section.