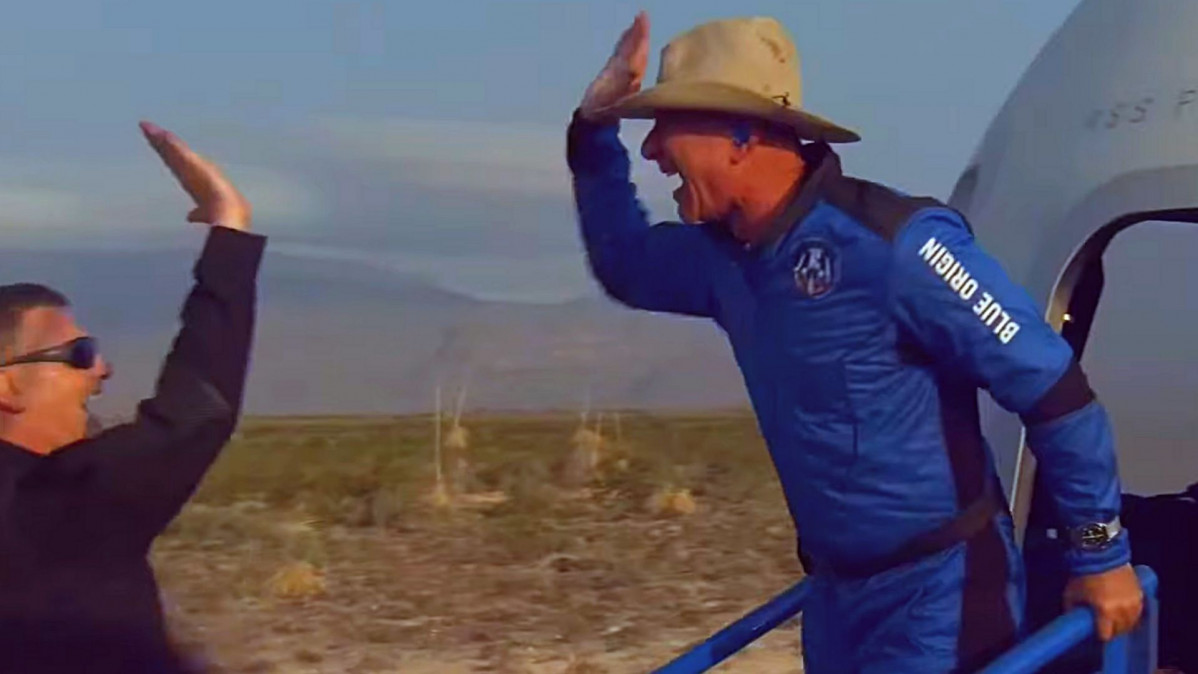 On Tuesday, Jeff Bezos became the second billionaire to reach the edge of space.

However, under his new cowboy hat, the ex-CEO and Founder of Amazon also experienced what’s called the “overview effect,” where astronauts feel a sense of interconnectedness with the vital fragility of a world that appears to exist without borders. And Jeff Bezos’ momentary reflection in this vein has caused him to say that we should finally stop polluting the Earth.

Instead, we should move human industry off-world, and pollute space.

Jeff Bezos had a big epiphany

“When you look at the planet, there are no borders,” said Bezos in a recent NBC News interview. “It’s one planet, and we share it and it’s fragile […] We live on this beautiful planet. You can’t imagine how thin the atmosphere is when you see it from space. We live in it and it looks so big. It feels like this atmosphere is huge and we can disregard it and treat it poorly.” This could bring a tear to anyone’s eye, and it sounds like a swift pivot in rhetoric from one of the most powerful voices in 21st century industry. But, is it?

In the last several years, billionaires like Elon Musk have radically shifted public discourse on key emerging technologies, for better with all-electric cars, and perhaps for worse with the cryptocurrency Doge. For Bezos’ part, several stories have emerged of Amazon workers laboring through intense heat and “power hours” to fulfill a never-ending list of orders. It’s not impossible that Bezos had a life-changing epiphany during his minutes in space. “When you get up there, and you see it, you see how tiny it is and how fragile it is,” added Bezos, echoing some sentiments of the late astronomer Carl Sagan’s “Pale Blue Dot” speech. It seemed like, maybe, Bezos might see the inherent danger of polluting one’s environment, wherever you end up living. But alas, this was not to be.

“We need to take all heavy industry, all polluting industry and move it into space,” said Bezos. It turns out, the CEO of Blue Origin supports efforts to protect the Earth’s biosphere from pollution, since it’s so small and fragile. Space, on the other hand, is famously big. So it will take “decades and decades to achieve” the transfer of all pollutant-creating industries into the final frontier, added Bezos. And, he’s not wrong. Transplanting entire industries into space is a big ask. It’s less difficult to imagine how one might construct an Amazon Echo or all-electric cars in space than it is to justify doing so when the entire consumer base is firmly planted on Earth.

For example, assembly lines are finely-attuned machines designed for human and robotic interaction under full gravity, which means we’d have to fundamentally rethink how we mass produce everything, for a zero-gravity environment. Then there’s the problem of raw materials. Admittedly, between the moon, Mars, and asteroids, there’s almost certainly more than enough useful ore to support industrial production, if we implemented a gigantic mining operation. But building a Ford Bronco in space and then bringing it back to Earth seems like a tall order.

While cement and steel are two industries reputedly difficult to decarbonize, the cost to ship a payload of cement back to the Earth’s surface is unconscionably high. For now, it’s best not to speak of it with numbers. Jeff Bezos’ suggestion to move all industry to space isn’t entirely lacking in appeal: With less industry and pollution on Earth, populations imperiled by climate change and ever-worsening conditions in the workplace might finally have the wherewithal to self-organize and galvanize the public voice, shifting the opinions of a global community that seems more interested in profit than the well-being of its citizens. But, barring a European-style universal basic income, it could also mean less work for planetary humans, and thus less money to live on. Time will tell what will happen to humanity and its livelihood as we try to outlive industry’s pollution of our only habitable world.