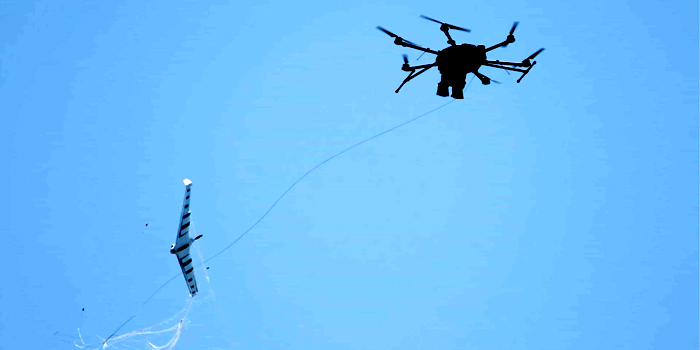 Fortem Technologies, a provider of airspace security and defense solutions for detecting and defeating dangerous drones, has announced that their DroneHunter successfully defeated threat drones during a recent US Army test in Yuma Proving Ground, AZ. DroneHunter is an AI-enabled, radar-guided drone that locks onto its target, fires a net, captures the threatening drone and tows it to a safe deposit location. Kinetic and non-lethal, the DroneHunter results in no/low collateral damage.

DroneHunter performed completely autonomously from queuing through launch, intercept, and capture of the threat drones, depositing them in a designated safe drop zone and landing. During the test, DroneHunter engaged fixed-wing and rotary-wing targets of various speeds, size, altitude and flight characteristics at operationally significant ranges with a high Probability of Kill (Pk). Fortem has partnered closely with the Army’s Integrated Fires/Rapid Capabilities Office for the past two years as part of their system of systems approach to counter-UAS. DroneHunter provides a significant enhancement to the overall counter-UAS solution.

“This test is further proof that the Fortem DroneHunter is capable of defeating UAS threats in a rigorous operational environment,” said James Housinger, VP of Program Management at Fortem Technologies. “With full integration into FAAD C2, operators can employ DroneHunter as a defensive weapon against a wide range of small UAS threats – threats which are one of the top concerns of U.S. Combatant Commanders in multiple areas of responsibility. The system’s 24/7 readiness for immediate employment day or night, or in restricted visibility without the need for a pilot, makes it an extremely effective tool against those threats.”