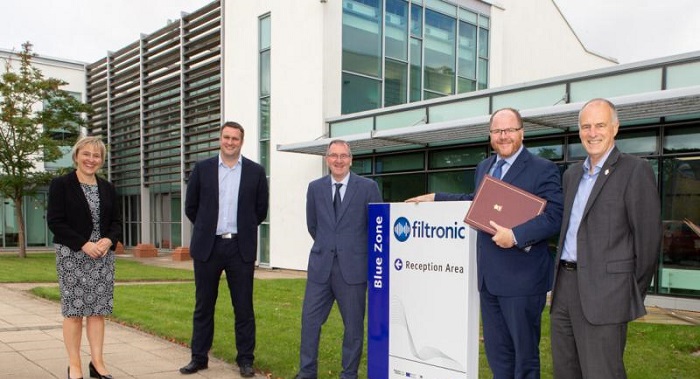 The visit was part of a wider initiative to showcase the North East region’s capabilities within the space sector. Mr. Freeman was joined by Paul Howell, Member of Parliament for Sedgefield, and Sarah Slaven, Managing Director of Business Durham. Filtronic impressed the contingent with its latest generation E-band transceivers, power amplifiers, and hybrid manufacturing capabilities. The technology and capabilities that Filtronic provides partner perfectly with the government’s objective for the UK to be a science and innovation superpower.

Richard Gibbs, CEO of Filtronic commented that they were delighted to be able to demonstrate the technology leadership and expertise they have within Filtronic. their visitors were impressed with their team, facilities, and the products that they develop there within the North East. Having a robust innovative UK supply chain is an area of real focus for the UK government and they were glad to demonstrate their potential role.

The Minister for Science, Research and Innovation, George Freeman stated that the North East and County Durham are rapidly becoming a cluster of 21st-century science and technology, with particular expertise in advanced manufacturing. Filtronic is a vital part of this rapidly emerging cluster.

“Following the recent visit of the Secretary of State for Business Energy and Industrial Strategy, I am absolutely delighted that I have been able to encourage the Minister for Science, Research and Innovation, George Freeman MP, to follow in his steps. I am very happy that he has joined us in his first week in the post,” said Paul Howell, MP for Sedgefield. “When I visited Filtronic in July, I said that their track record is second to none within UK RF technology, and it makes me immensely proud that the North East can boast world-class manufacturers on its doorstep. The pace at which they innovate and the markets they operate in, and the opportunity to use their intergenerational skill set to help solve those problems through interesting jobs, makes organizations like Filtronic a key part of the Government’s Space strategy. A visit from the Minister for Science could not be more timely.”

Sarah Slaven, interim managing director at Business Durham said that they were delighted to welcome the minister to NETPark and to introduce him to some of the exciting and innovative companies they have at the park, like Filtronic. She further continued that the North East Satellite Applications Centre of Excellence which is based at NETPark has played an important role in the growth of the region’s space sector, championing space opportunities and connecting businesses to bring new expertise into the sector. They look forward to continuing to work with Filtronic and the other hi-tech business to build on the success they have had developing the next generation of advanced technologies.