Alie highlights her crazy experience co-hosting the Arm DevSummit TV show and shares her can’t miss sessions from the event.

It’s throwback Thursday, which means it’s the perfect excuse to post my reflection of the Arm DevSummit. My overview may be a month late but don’t be dismayed, all of the videos from the Arm DevSummit have been posted to their website. You just have to register and log in.

VIEW ALL OF THE ARM DEVSUMMIT VIDEOS

For those of you who didn’t tune in, I was graciously asked by Arm to co-host the DevSummit alongside my good friend, Robert Wolff, as well as the idiom-packed Brian Fuller. As with most events for the past 2 years, the Arm DevSummit was virtual. However, unlike any other event I’ve seen, Arm created a live, morning news show-esque track called Arm TV where my fellow co-hosts and I reflected on the keynotes, discussed our perspectives on industry trends, and interviewed some notable guests.

I of course couldn’t watch Arm TV live, but after the fact, friends and colleagues kept telling me that Arm TV was their favorite portion of the conference. Multiple people told me that they had it playing in the background and would shift their focus when something caught their ear which made me think of how my Dad always works on his computer while listening to the news on the TV in the background. Considering that feedback, I think Arm achieved something that no other virtual conference, that I’ve heard of, has managed to achieve: keeping people watching for the entire span of the virtual conference. Definitely not an easy task.

From my point of view, it was an experience unlike any other. Arm flew us all out to Silicon Valley for a week of pre-rehearsals and live recordings. They created an entire TV studio with film cameras, teleprompters, and a beautiful set – all supported by a team of more than 30 people on-site and in the UK-based control room. We even had earpieces with people in the UK telling us how much time was left and when we were up next to speak! It truly felt like I was on a TV show. I’m incredibly grateful to Arm, and specifically Robert, for giving me this opportunity. Thank you!

Now that I’ve gotten my excitement out of the way, let’s get to what this event was all about! As the ever so wise, Steve Balmer put it “Developers….developers….developers!” After all, this was Arm’s Developer Summit. And, oh boy, was it about developers. From the first keynote given by Arm’s CEO, Simon Siegers, to all of the workshops, presentations and interactive sessions. Arm developed an astounding array of content centered around new & innovative ways Arm technology is being used, their advancements in tools & resources for developers, and how they are partnering with some of the biggest companies within the industry.

With all the content they released, it would be impossible for me to cover everything, so here are my top 3 videos you should watch.

In addition to those spectacular videos, I would be remiss if I didn’t mention SparkFun’s involvement in the Arm DevSummit. As with any great developer conference, there were many sessions where you could follow along with industry experts and learn how to use some of the latest and greatest technology. But unlike a conference for React.js developers, the Arm DevSummit was focused around developers using hardware! That’s exactly where SparkFun comes in. Arm partnered with SparkFun to provide about 200 free hardware kits spread out across 4 incredible workshops. Together, we developed the hardware kits to suit the needs of the workshop presenters and handled all of the distribution to make sure all of the winners had their kits just in time for the DevSummit. The videos for all of the workshops have already been posted so check them out!

To wrap-up this blog post, I wanted to address the elephant in the room. It’s been almost two years since in-person events last happened and, although we have all become much more used to our virtual existence, there is still so much value that is normally gained through in-person interactions which we are currently missing out on. Whether you start chatting to the person next to you at a talk or you run into a former colleague in the hallway or you go out for beers at the end of the night, one of the most important aspects of a conference is the random interactions that could lead to opportunities and collaborations and ideas which you would have never been exposed to if not for physically being there.

Arm made many innovative decisions when deciding how they wanted to run this conference, but one of the most important was their decision to create the DevConnect track. DevConnect was several virtual chat rooms that you could hop between and talk to whoever was online. Each room had a different topic but, like in any in-person interaction, that wasn’t super strict. I’m mentioning this because it was a step in the right direction towards bringing back those in-person, spur-of-the-moment, interactions that we have been without for the past two years. In-person events will come back eventually, but unlike before, they will most likely have a virtual aspect. These types of efforts to merge the two worlds will have measurable benefits now but immeasurable benefits in the future as they open up the entire world to information and interactions that were once kept hidden away behind the cold doors of convention centers everywhere. 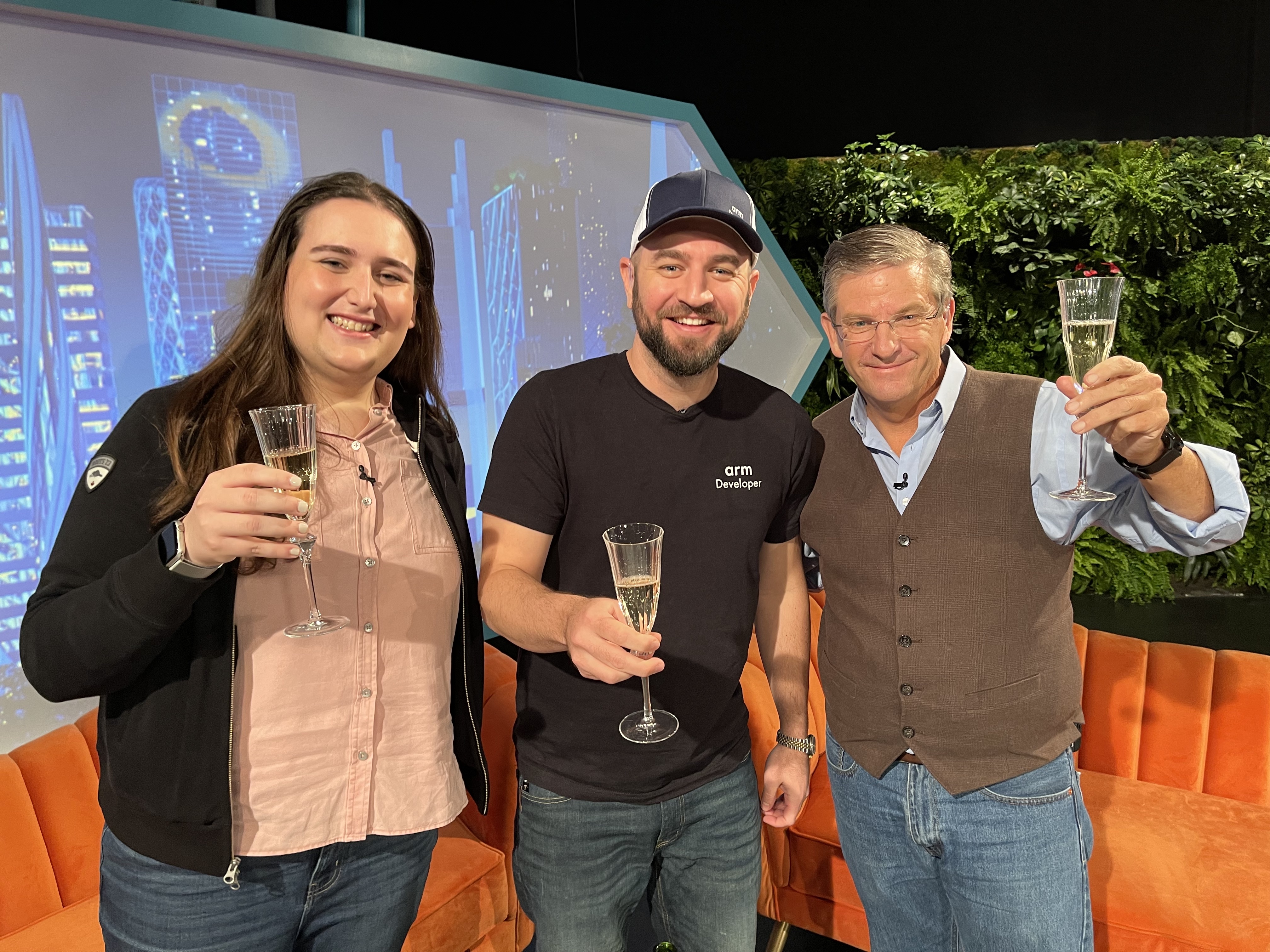 As they say in show business, thats a wrap!

Fun fact for anyone who made it to the end, although Robert and Brian were reading off of a teleprompter for the majority of their sections, I was entirely ad-libbing all of my response!. As you can imagine, that added to the already high-stress and low-sleep week so I hope I did a good job gilding the lilly.