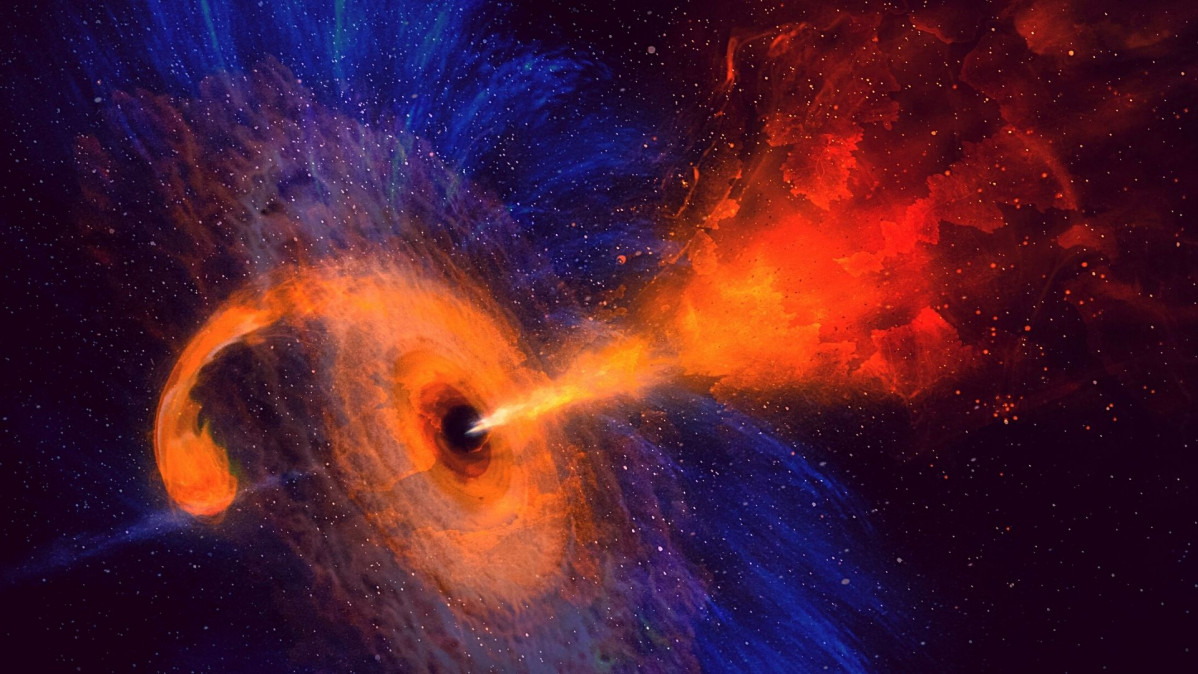 For everything there is a beginning. Even black holes.

Last week, we spoke of a newly-detected ‘silent’ black hole within a globular cluster called NGC 1850, located in a nearby galaxy. Roughly 11 times the sun’s mass, the cosmic maw is locked in orbit with another star in a binary system. But while it doesn’t show the levels of typical black hole predation on its poor cosmic companion star, in the end, it’ll eat it alive as the death dance carries on, until there’s nothing left but a stripped core that fades slowly into a white dwarf, according to the study initially shared to a preprint server.

And, the study of young black holes like this one could go further than revealing the early evolution of black holes: It could also substantially enhance our ability to detect black holes in various stages of their first steps, both feeding, and “dormant.”

No one can directly observe a black hole, which understandably makes it hard to prove they exist. The best evidence we’ve found so far comes from binary systems where a visible star is trapped in orbit with a colossal yet unseen predator. Observations like this have given astronomers a means to track and analyze black holes by their influence on surrounding stars and other sources of light. While only a handful of observations of non-interacting black holes moving through star clusters have been made, because of the limits inherent to “non-feeding” black holes.

Additionally, no direct detections via dynamic effects on the surrounding environment from black holes within star clusters had ever been made, leaving out knowledge of how the monstrous singularities evolve in such high-density stellar environments. Until now. The study authors, under the leadership of Sara Saracino from Liverpool John Moores University in the U.K. have finally detected a black hole in a globular cluster (of stars) called NGC 1850, thanks to its interaction with a nearby star. Called NGC 1850 BH1, the object is fairly young, at only roughly 100 million years old. But it’s big.

A window into the infancy of black hole evolution

The newly-discovered black hole resides in the Large Magellanic Cloud (LMC), a satellite galaxy of our own Milky Way. This latest discovery is part of a broader and systemic search for stellar-mass black holes in young and gigantic stellar clusters within the LMC via the use of observations from the multi-epoch MUSE (Multi-Unit Spectroscopic Explorer), captured by the ESO’s (understandably huge) Very Large Telescope (VLT). The physics behind the new search involves radial velocity variations. According to the study, the binary is comprised of a black hole that has roughly 11.1 times the mass of the sun, paired with a main-sequence turn-off star (MSTO) that’s roughly 4.9 times the mass of the sun.

It’s also semi-detached, and only has a period of roughly 5 Earth days, along with an orbital inclination of 38°. Notably, the researchers think the binary system will undergo a Roche-Lobe overflow when the companion star evolves past its main-sequence phase. This will continue with a “stable mass transfer and significant X-ray emission,” as the distance between the binary increases. “Mass transfer will likely end when most of the hydrogen envelope of the donor star has wither been transferred to the companion or been lost from the system, leaving a helium star core,” said the astronomers, in a press release. “If so, it will likely experience another phase of mass transfer (and X-ray emission) when the star burns helium in shell, ending up as a black hole + white dwarf system.” In other words, the young black hole will continue feeding until its companion is reduced to the soft glow of a dying star: a white dwarf. This latest discovery could mark the beginning of a new study of young black holes while they’re still in their “initial mass function”, the early eons immediately after they form. If we can expand our analysis of more black holes in this early stage of their lives, we might enhance our ability to detect other ones locked in a dance of death with nearby stars.