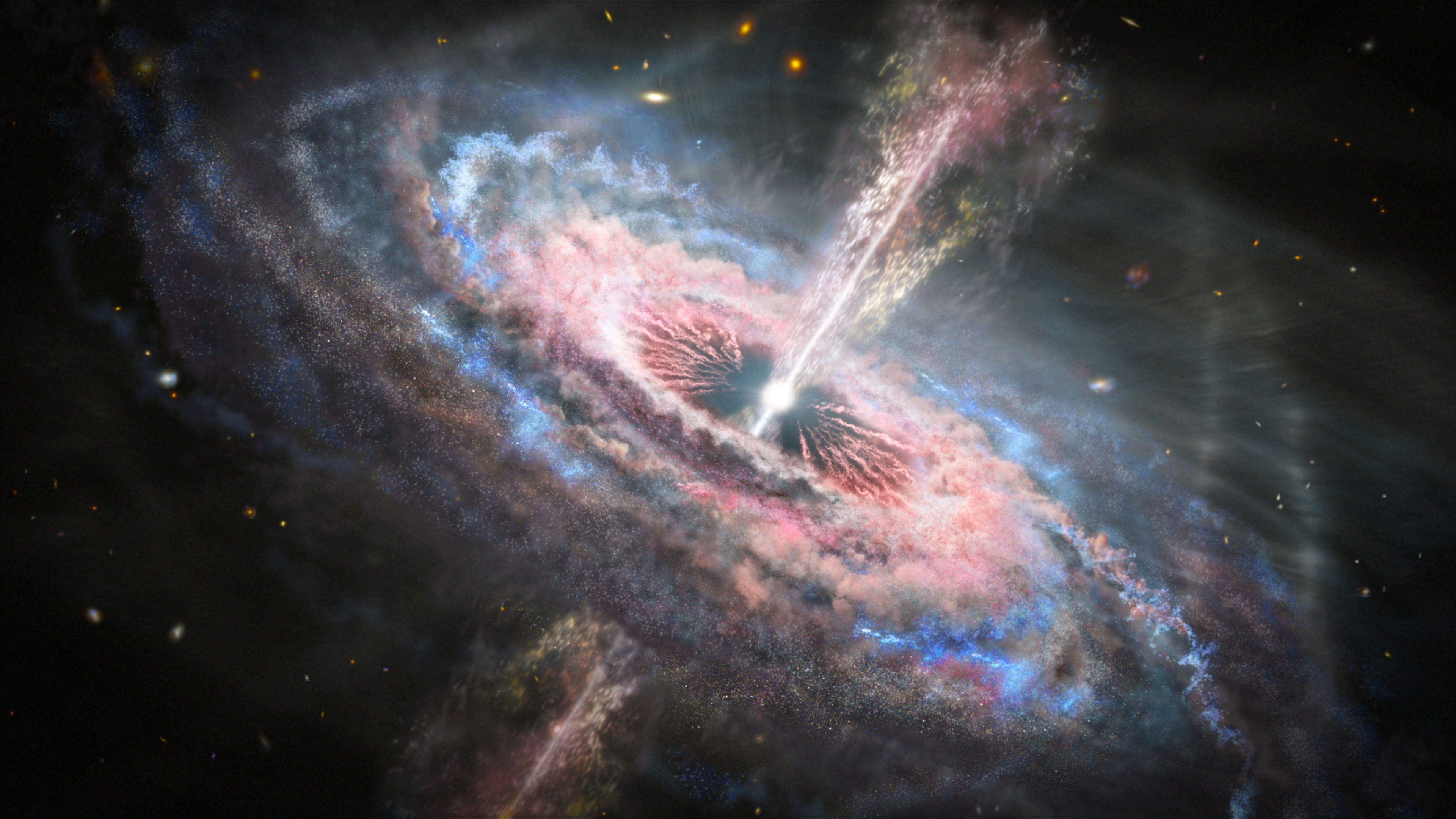 Paul M. Sutter is an astrophysicist at SUNY Stony Brook and the Flatiron Institute, host of “Ask a Spaceman” and “Space Radio,” and author of “How to Die in Space.” Sutter contributed this article to Space.com’s Expert Voices: Op-Ed & Insights.

How do you test theories of the universe? By building gigantic supercomputers and simulating the evolution of the cosmos.

A team of Japanese scientists has built the largest-ever cosmic simulation to include tiny “ghost” particles called neutrinos. To explore one of physics’ biggest unsolved mysteries, the researchers used a whopping 7 million CPU cores to solve for the evolution of 330 billion particles and a computational grid of 400 trillion units.

By far the most important form of matter in the universe is dark matter. We’re not sure what it is or what it’s made of, but we do know that there’s a lot of it. It makes up about 80% of all matter. Baryonic matter — the stuff that makes up stars, planets and the rich variety of the entire periodic table — makes up just a small fraction of all the matter in the universe.

Related: Where did all the baryons go?

Dark matter forms the backbone of the cosmos. Billions of years ago, there were no structures in the universe. All of the matter — dark or otherwise — was smoothly distributed, and not lumpy at all. There simply weren’t very many variations in density from place to place. Overall, it was a pretty boring universe.

But with time, the universe became more interesting. There were tiny density differences, seeded from microscopic quantum fluctuations in the early seconds of the Big Bang. Places with slightly higher density had slightly more gravity, and that’s where dark matter began to pool together. As those early structures budded, they attracted even more material. Over billions of years, this process emptied out vast regions of the cosmos — now known as cosmic voids — pulling all the matter into an extensive network of clusters, walls and filaments.

And then there are neutrinos, extremely tiny particles that have barely any mass. Indeed, they make up less than 0.1% of all the mass in the universe. But these minuscule particles have an outsize influence on the evolution of structures. They are fast — really fast — capable of traveling at nearly the speed of light. This incredible speed dampens the formation of large structures, such as galaxies and clusters.

Whereas dark matter wants to keep piling up through gravity, neutrinos go too fast to settle down in one spot. And although neutrinos have very little mass, they still have some mass. They can use their gravity to weakly influence the behavior of dark matter, thus preventing it from clumping as tightly as it normally would.

In other words, the universe is a little smoother than it would be without neutrinos.

Mysteries of the universe

To try to understand the nature of dark matter and the role of neutrinos in shaping cosmic evolution, cosmologists often turn to computer simulations. If you change the neutrino mass just a bit in the simulations, it will change how the neutrinos influence the formation of structures over billions of years. So by measuring those same structures, you can get an understanding of neutrino mass.

These simulations usually encompass a small fraction of the real universe and start with a set of dark matter “particles,” with each particle representing a certain amount of dark matter ​​— for example, a single blob with a mass millions of times the mass of the sun. The simulations then position these particles as they would be in the early universe. The simulations track how those particles evolve through their mutual gravity, giving rise to the giant structures we see today.

This is an approximation technique, because the true behavior of dark matter is represented by a limited number of particles, but it works very well for dark matter. Simulating neutrinos is much more difficult because of their ridiculous speed. It’s difficult to follow their behavior within the simulation because they can move from one side of the simulation to the other in a short amount of time. So the simulations can’t keep up with how the neutrinos are acting and how they’re influencing dark matter.

A matter of computation

So maybe we shouldn’t bother trying to approximate the behavior of neutrinos. To correctly follow the evolution of neutrinos and account for their fast behavior requires solving an incredibly complex equation. Solving this equation — called the Vlasov equation, after Russian physicist Anatoly Vlasov — however, requires immense computational resources.

So a team of Japanese scientists did just that: They used 7 million processors on the Fugaku supercomputer to trace the evolution of dark matter and the influence of neutrinos on the formation of structures. The researcher used 330 billion particles to represent dark matter and a computational grid of 400 trillion components to represent neutrinos, in the largest simulation of its kind.

And while it may not have solved the mystery of neutrinos’ mass, the simulation does pave the way for more of its kind. In essence, this simulation was a proof-of-concept to show that we can now include neutrinos in simulations more accurately than ever before. Armed with this new technology, future simulations will open a window into the role of neutrinos in the universe and perhaps even reveal a key to unlocking their mass.

The team’s paper was posted recently on the preprint server arXiv, and you can see the simulation here.