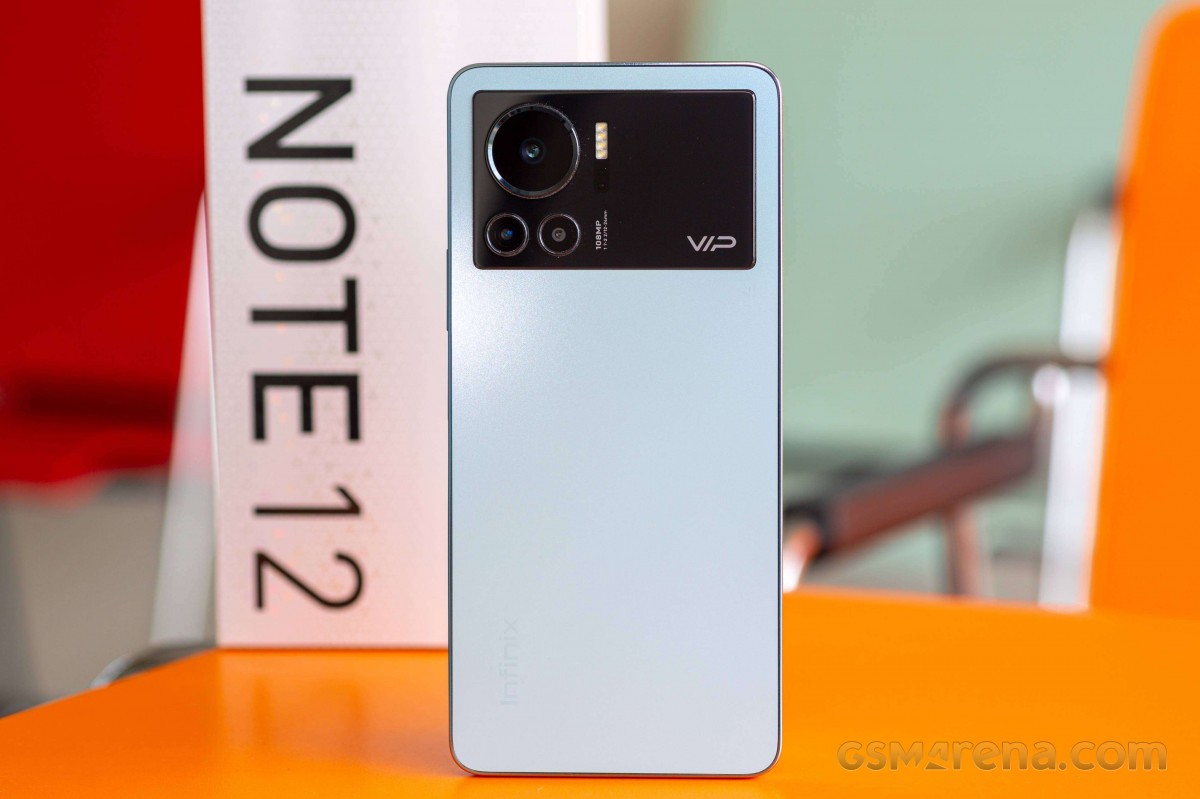 The Infinix Note 12 VIP is focused on three things – fast charging, fast screen refresh rate, and camera performance. Charging leverages a 120W beast of a charger that can, on paper, do the 0% to 100% in just 17 minutes.

Finally, the Infinix Note 12 VIP packs a 108MP main camera that combines 9 pixels into 1 for a 12MP resulting image, or can shoot full-res 108MP stills. It’s backed up by a 13MP ultrawide with autofocus, a 2MP depth sensor, and a 16MP selfie that has its own LED flash. We’ll give those a look as well.

Rounding off the specs sheet, we have a 4,500mAh battery, a MediaTek Helio G96 chipset, 8GB of RAM that can be expanded using up to 5GB from the 256GB storage, and Android 12 with Infinix’s XOS on top. Finally, a few nice touches, like the 3.5mm headphone jack, and stereo speakers.

The retail experience is up to the VIP name. The expected accessories are all here – earbuds, a complimentary case, a 120W charger that is impressively compact, and a USB cable.

Then you have some extra niceties that Infinix has added – plastic screen protector, a medley of stickers, a SIM ejection tool, and a voucher for one XGold to spend in Infinix’s XClub. Not a bad haul for $300. 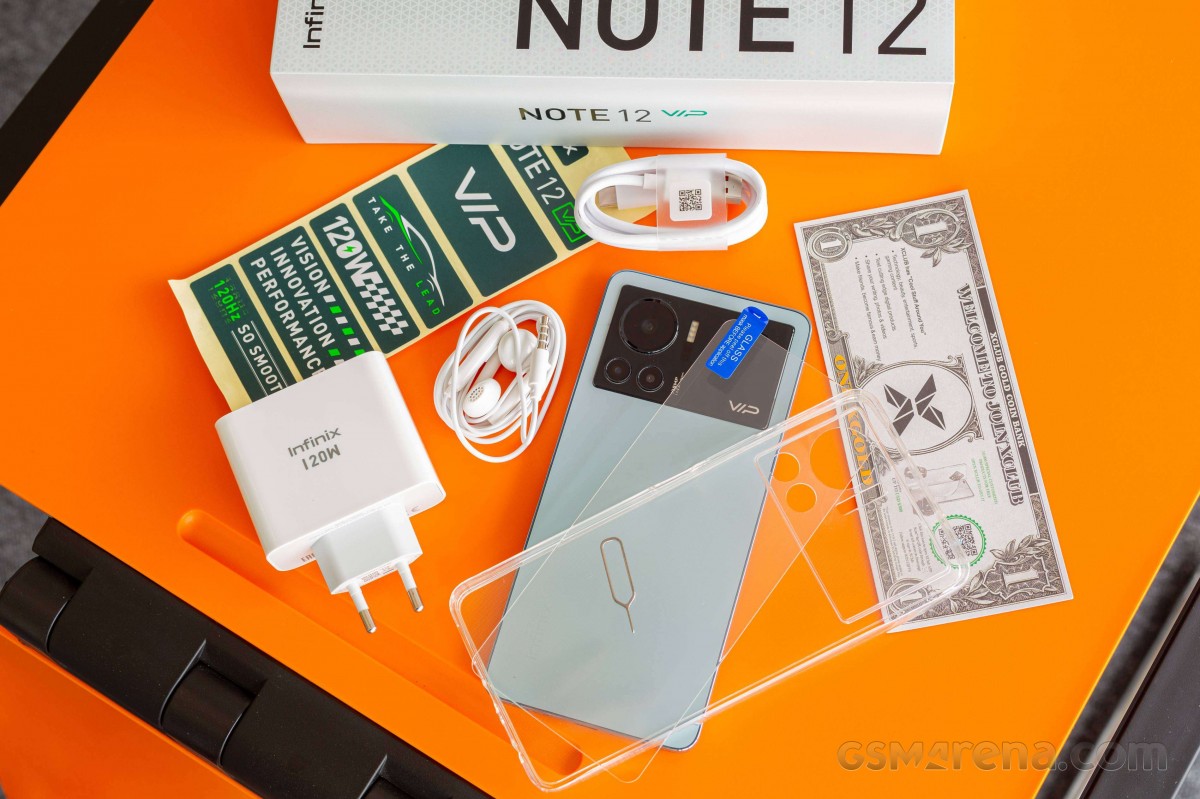 So, let’s now talk the phone itself.

The Infinix Note 12 VIP is straight, squared-off, and flat. The rear panel is flat, the sides are flat, and the display is almost entirely flat, save for an ever so slight curve at the edges. The surface on the sides is glossy, and it’s color-matched to the rear panel, which has a matte finish to it. 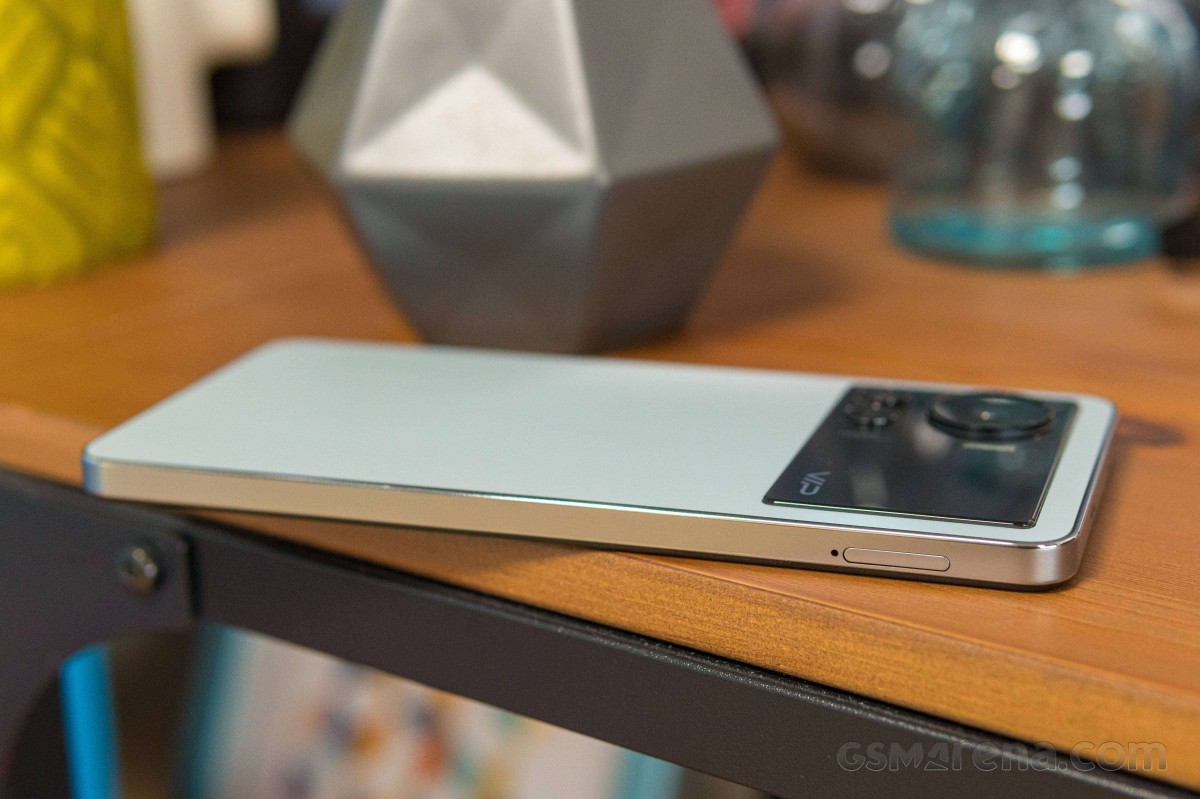 Despite the difference in surface finish, the Infinix Note 12 VIP is a slippery phone if you use it without the provided case. On the upside, the phone sits comfortably in the hand. It’s nicely balanced, it doesn’t feel too big, even if it certainly isn’t a compact phone. 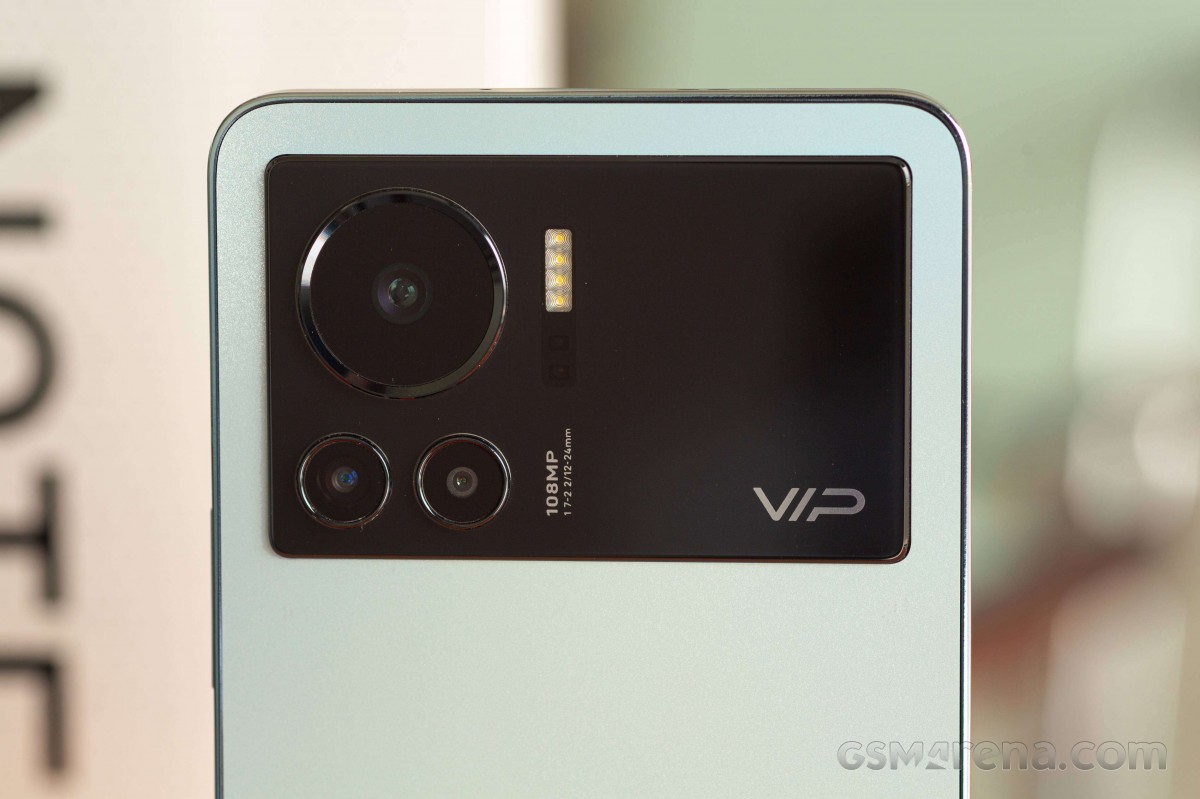 Just under 200g, it’s not light either, but it isn’t the heaviest around. And when you take it into your hand, the Infinix Note 12 VIP feels lighter than you had expected. 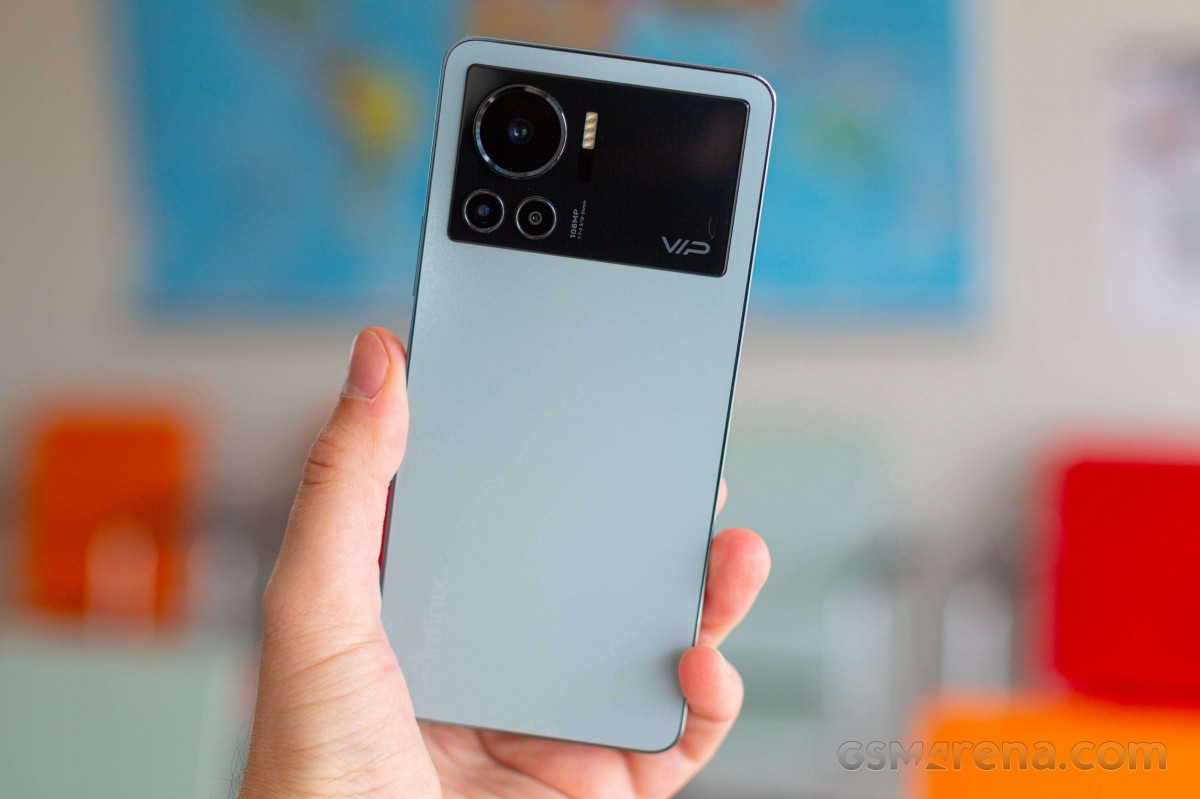 The display is impressive. It’s surrounded by thin bezels and the punch-hole camera doesn’t eat too much into it. The panel is decently bright, but isn’t as good as flagship OLED screens in direct sunlight. 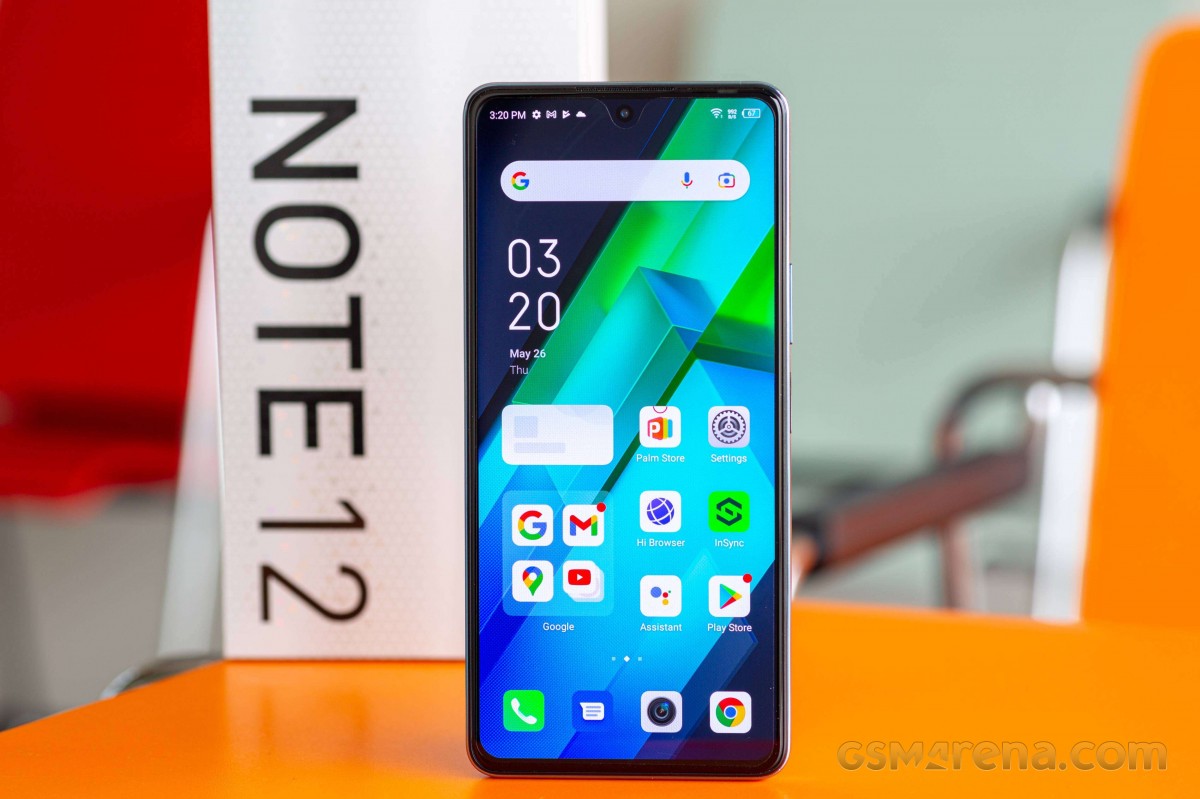 The contrast of the panel stands out. The colors are very deep and punchy, making it a pleasure to consume multimedia on this screen. There is a noticeable blue tint that more keen-eyed users will notice immediately, and it’s not something you can correct due to limited adjustment options.

Out of the box the phone is set to switch automatically between 60Hz and 120Hz. The automatic behavior favored 60Hz, which feels choppy to those spoiled by modern high refresh rate screens. Digging deeper into the settings, we found Ultra Touch, which can further tune the screen for faster swipe and motion speed. Setting both to Fast made the Infinix Note 12 VIP infinitely smoother.

A few words on XOS 10, which sits on top of Android 12. It’s chock-full of features and options. Perhaps even overwhelmingly so. Many of the included apps could also be considered bloatware since Infinix has included quite so many first-party and third-party apps, oftentimes with overlapping feature sets.

More importantly, XOS 10 works smoothly, with no hiccups or stutters despite the influx of apps. So Infinix has done its job pretty well in the custom UI department. And when we say custom, we mean custom.

Starting from the lock screen, you get an optional Magazine service. Beyond that, the clock screen is also affected by the powerful Theme support, which includes things like video slide shows, custom fonts, as well as an online Theme repository in the shape of a separate XTheme app. 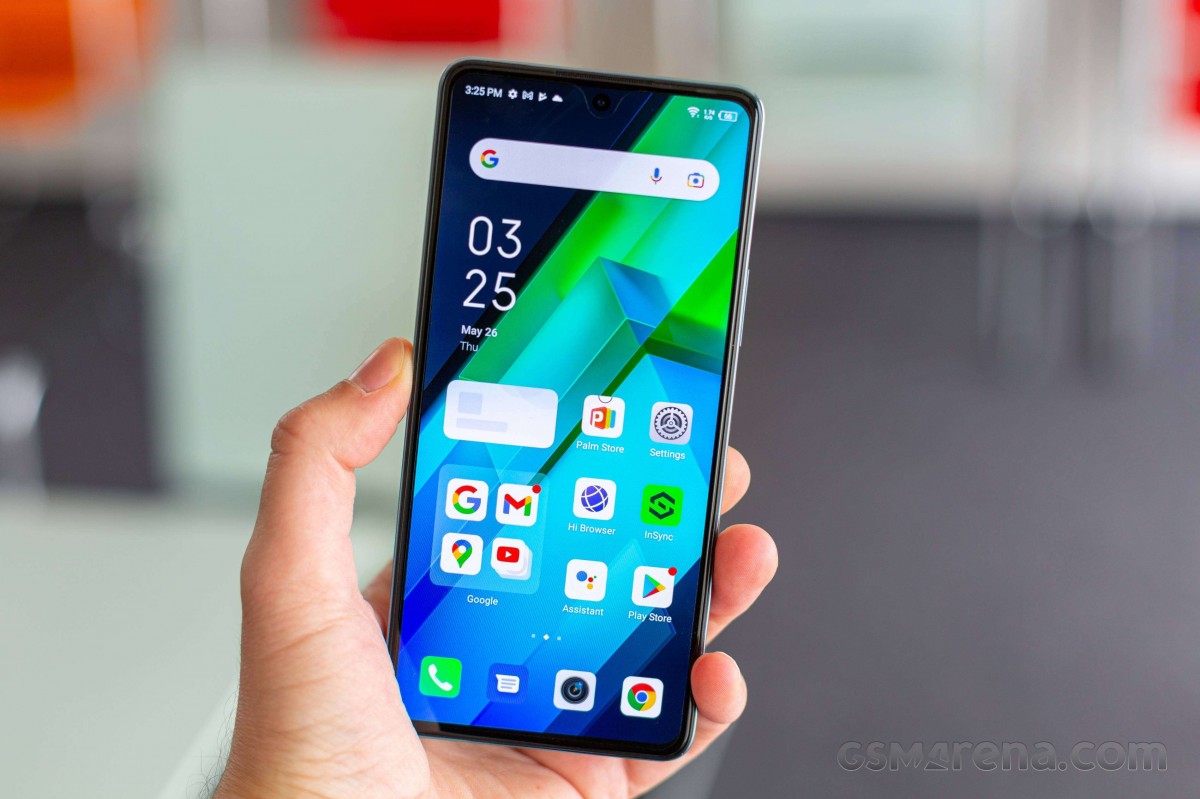 The OS packs all the features you’d need, including features like an always-on display, a power manager that manages RAM usage, a theming engine, FM Radio, a code scanner, a compass, the list goes on.

The unit we’re testing comes with a MediaTek Helio G96 – with an octa-core processor with two 2.05GHz Cortex-A76 cores and six 2.0GHz Cortex-A55 cores. There’s 8GB of RAM that can be expanded using up to 5GB from the 256GB storage. 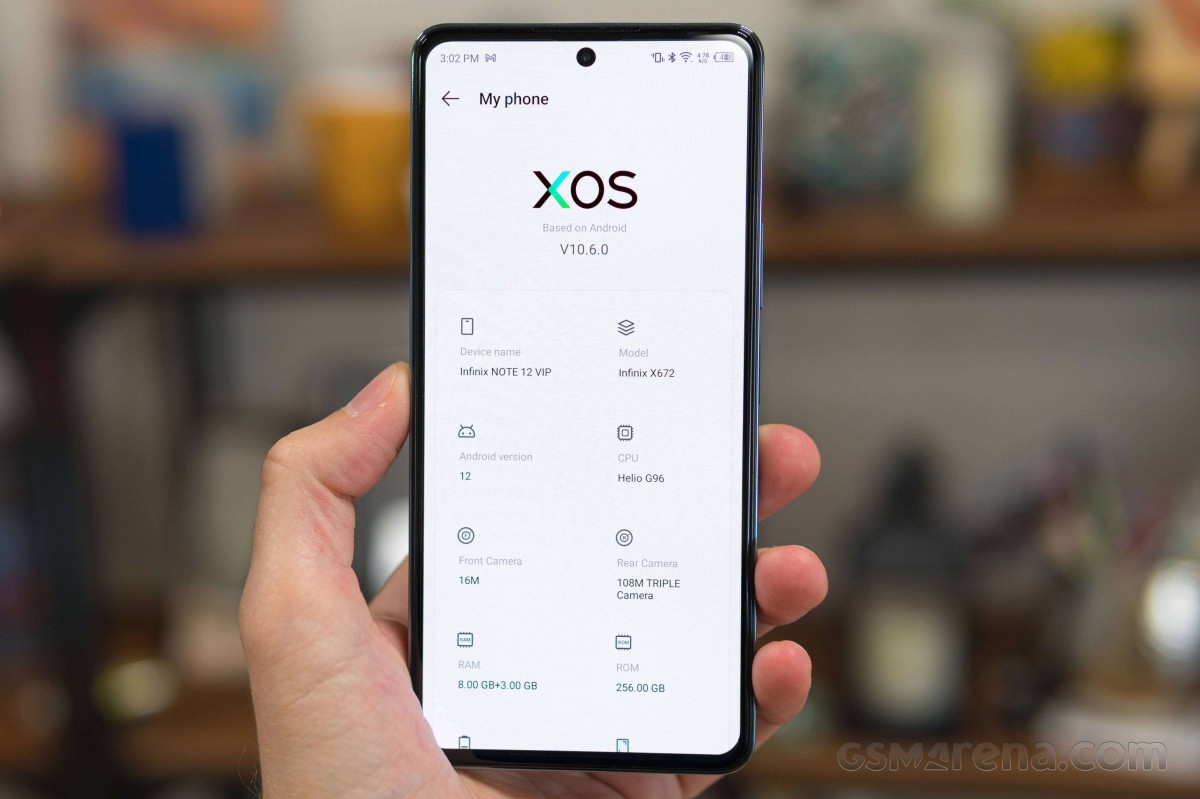 We’ve tested this chip in detail in our Infinix Note 11 Pro review.

This is only the second Infinix phone to go beyond 64MP on its main camera, the other is the Zero X Pro, also with a similar 108MP main camera. That phone’s sensor is a different, slightly bigger one. And it is paired with a different set of cameras. 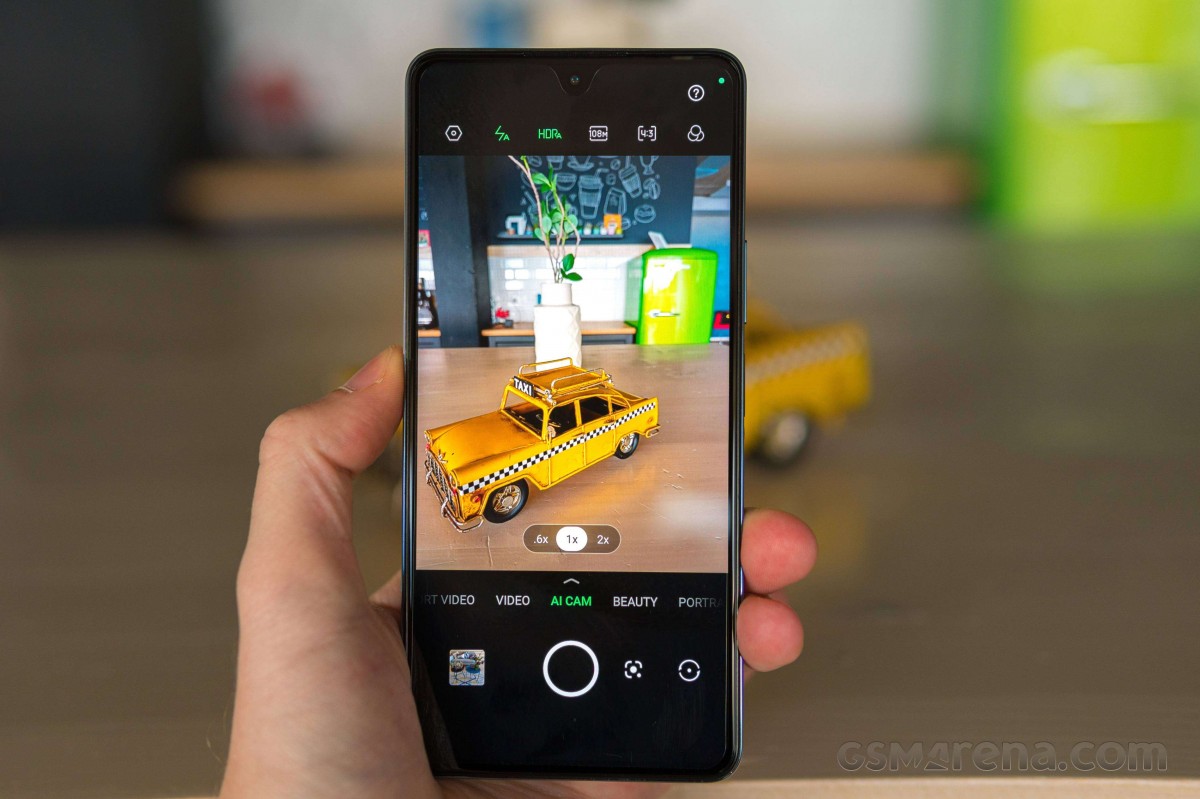 On the Note 12 VIP, we get a 13MP f/2.2 ultrawide camera with autofocus, a 2MP depth sensor (which barely contributes anything), and a 16MP f/2.4 fixed-focus selfie shooter. There’s no dedicated zoom camera, but the 108MP does allow for decent quality 2x crops.

The pixel-binned, 12MP snaps from the Infinix Note 12 VIP are good. Colors lean more towards the natural and we rarely got an over-the-top result. The white balance is slightly cool and there’s a creep of blue and cyan in whites.

The detail is okay, but a lot of it was sacrificed by the noise reduction algorithm. Infinix has avoided noise like the plague, there’s no trace of it, which sadly means that a lot of the fine detail is lost. There’s a heavy helping of sharpening put to bring back the detail, but the result is overly-processed-looking photos. Still, if you like your images noise-free, these look the part.

The sensor is big enough to offer a good level of background blur, especially if your subject is close to the camera. 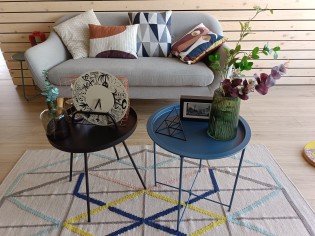 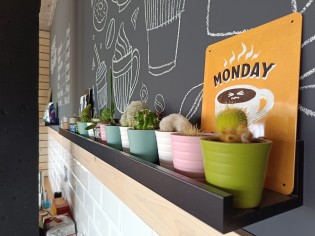 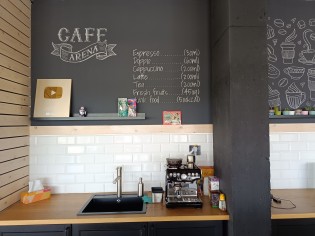 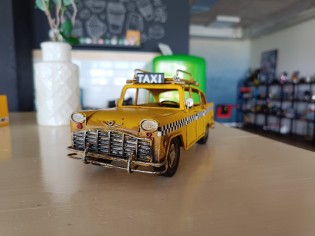 Here’s a look at the same scene, shot at the default 12MP, and the full 108MP. The full-res shot appears to have lost its HDR effect and we see blown-out highlights. Multi-frame sharpening has also gone, leaving mushy, poorly-defined textures in the fruit. And, the phone was noticeably slower in taking the photo. We’d avoid this mode as it really doesn’t offer enough benefits to justify the compromises. 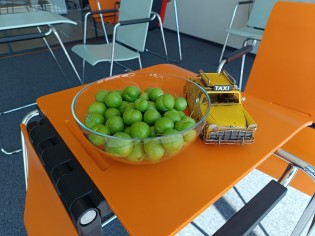 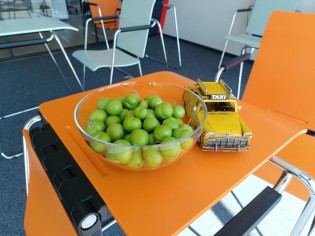 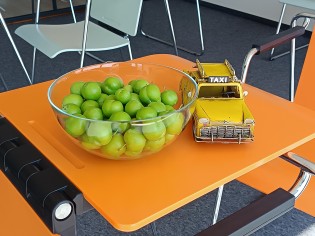 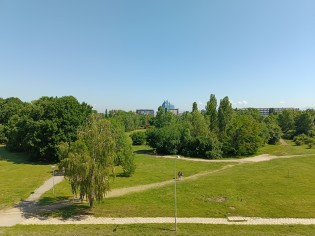 The ultrawide camera is hit-and-miss. One photo is sharp, while the other isn’t. And the camera can’t cope with any sort of highlights in the frame (notice the blown-out whites in both images). 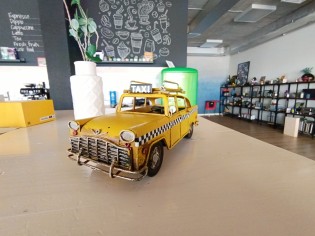 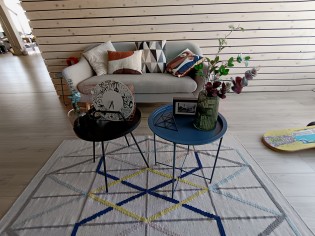 The poor dynamic range theme continues with the selfie camera, but aside from that, we’d give this one a good mark. It’s wide, color-accurate, and very detailed. This camera is also more tolerant of noise, allowing some subtle face texture to make it to the resulting image. Its dedicated flash is also very strong, which should help for those bar selfies. It’s so strong that the very process of photo taking is a bit uncofmortable though. 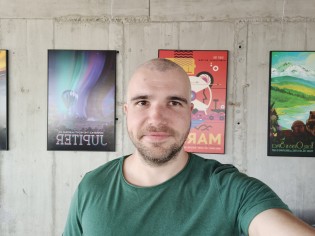 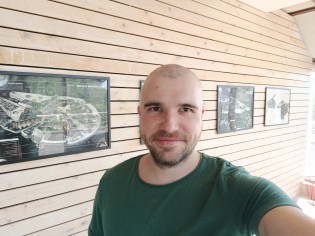 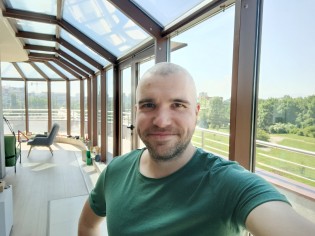 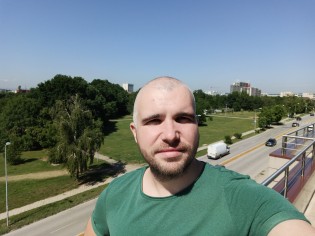 Okay, now we come to the meat of the Infinix Note 12 VIP – charging. Infinix claims the Note 12 VIP’s 4,500mAh battery can go from 0% to full in just 17 minutes. Its 120W Hyper Charge technology relies on a dual-cell battery in the phone and a dual charge pump to put the charge in efficiently.

And, there are 103 protection features inside the phone to safeguard that process. An additional 18 real-time temperature monitoring systems ensure the battery doesn’t heat up excessively, allowing Infinix to guarantee up to 800 charge cycles with this phone. 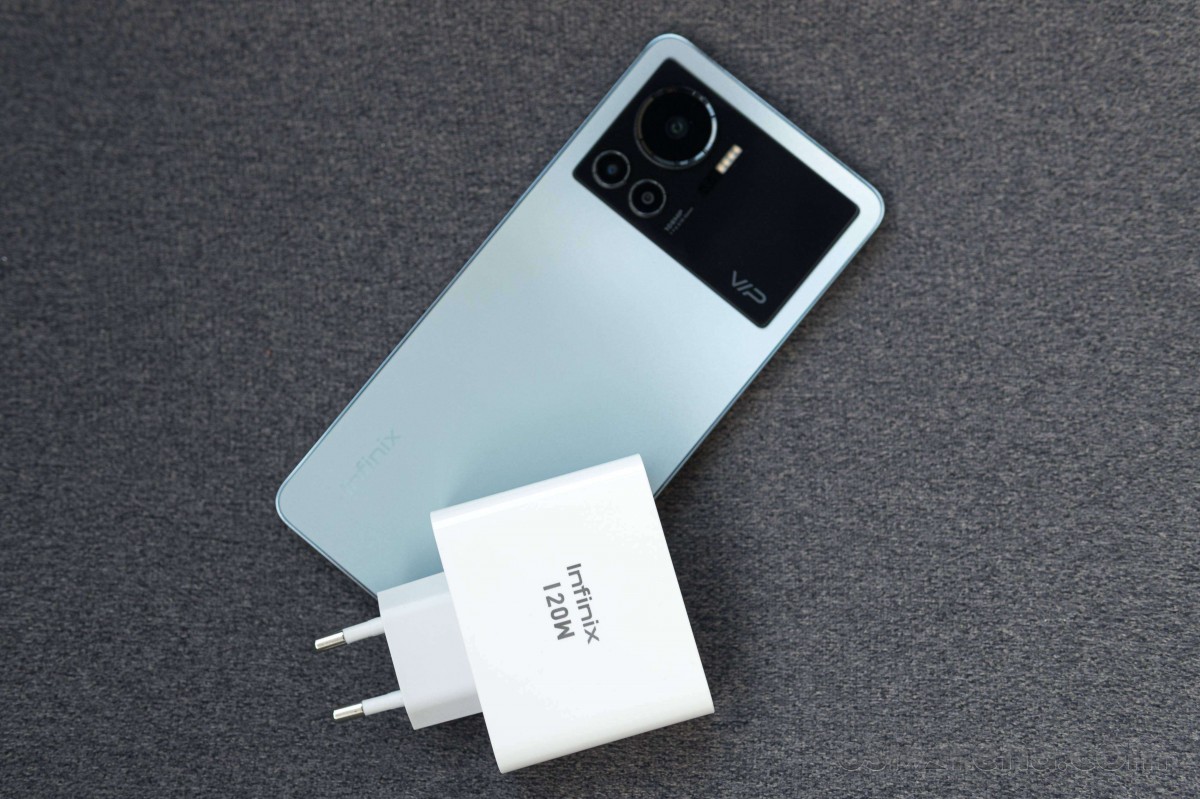 We drained the phone down to 0% and recharged it back to full several times. In none of them did the phone heat up drastically during charging. It was only warm, never hot.

However, we couldn’t achieve Infinix’s claimed 17 minutes, we would only go to 88% at that point. Over our test runs, we got an average of 22 minutes to full charge, which is still very impressive. The fastest phone we’ve tested to date did it in 16 minutes, using an up to 150W charger. The 120W Xiaomi 12 Pro and 11T Pro did in 21 minutes.

To close things off, the Infinix Note 12 VIP is a great all-around phone. Its clean design matches nicely with its good build quality, it’s very well packaged and it performs great.

You’ll get good battery life, we’ve no doubt, but more importantly, you’ll get superb charging, thanks to the 120W Hyper Charge. The main camera images are good enough, as are the selfies. While the display is solid too. 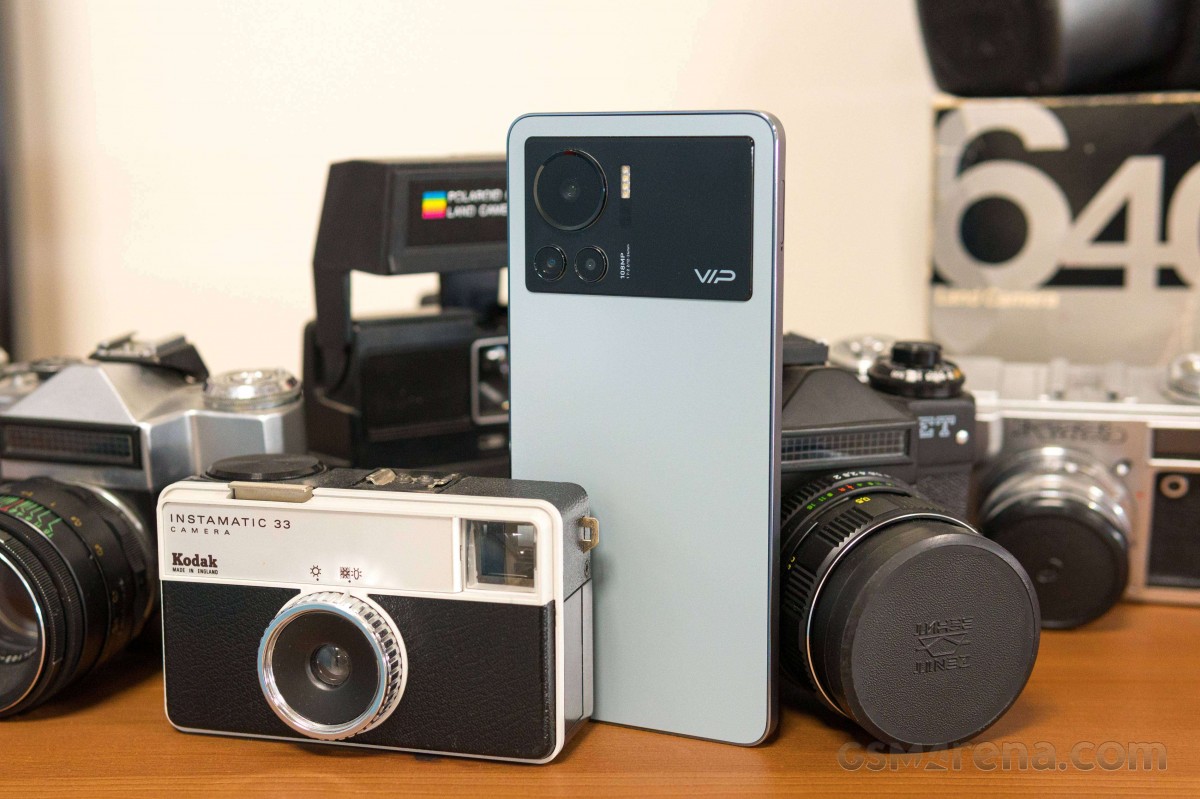 The Infinix Note 12 VIP will be available soon in select regions at $300. You can visit the official site, which will guide you to a store near you.